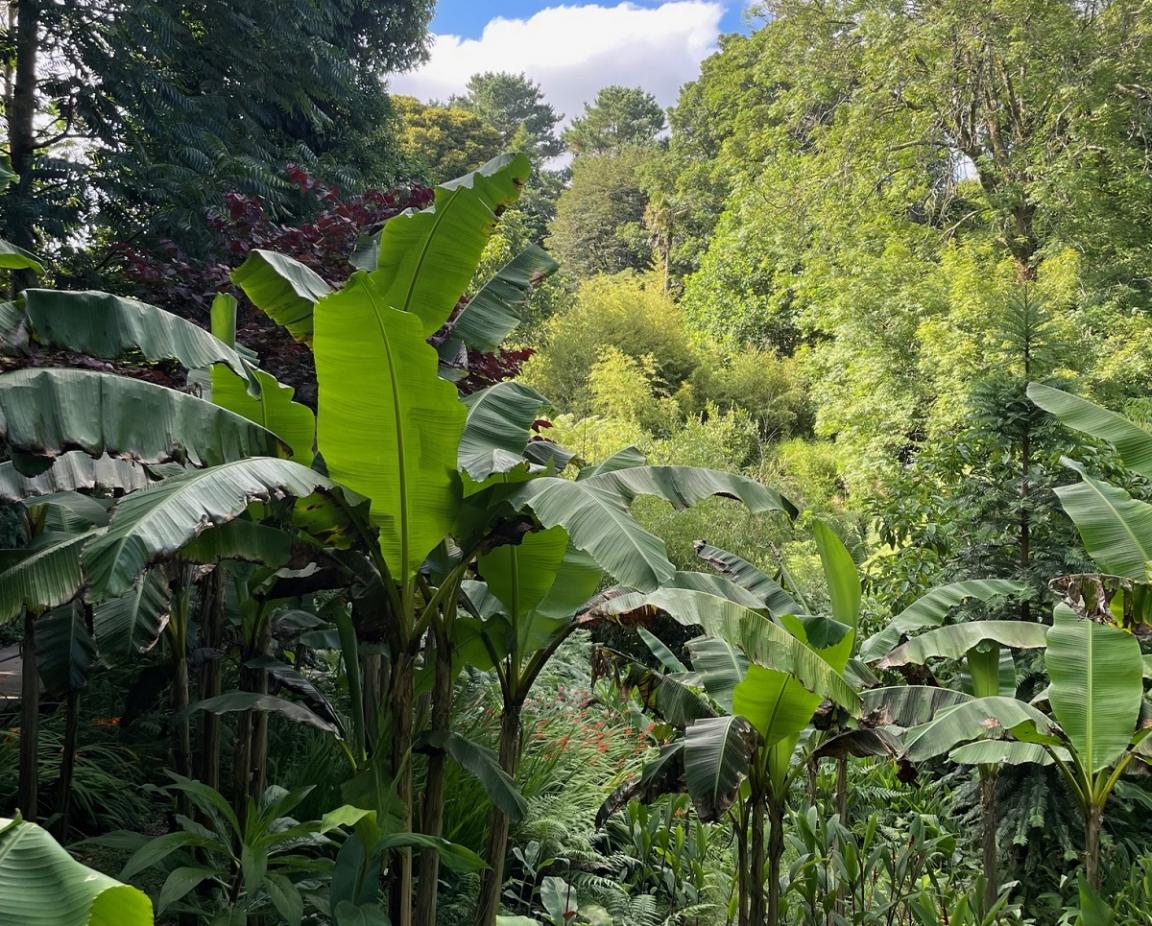 This summer, in the south of England, I was able to admire the art of garden design which over the centuries has taken advantage of the extremely mild and humid climate there. And with the utmost finesse and considerable financial resources, it has gathered the most diverse plants of a world-spanning empire around the manors there. Tree ferns from New Zealand and mammoth leaves from the mountain swamps of Brazil now stand in Cornwall's gorge gardens alongside cedars from Lebanon and palmyra palms from the tropical regions of southern India. A lush, masterful garden art that was created under the conditions of its time.

But outside these gardens, the world looks very different. In the structurally weak villages of the region, today's "builders" all too often come up against their narrow limits. I hardly found a bed and breakfast where cold damp didn't climb up the outside walls, where rickety sash windows were held in place makeshift with a stick, and where ramshackle electrical wiring could set the house on fire at the next flick of the light switch. I stood in amazement in front of rainwater downpipes that were obviously distributed criss-cross over the facades in geometrically demanding installations with the aim of optimizing costs and saving time. How, in a region where only a few decades ago such virtuoso garden art had been created, could the simplest building craft ambitions and skills today have been almost completely lost?

1300 km further southeast, in Vorarlberg, Austria, I found the answer a few weeks later. There, the century-old mansions and landscaped gardens are missing. But the villages, farms and houses are connected to their natural surroundings in a good tradition of craftsmanship. Just like the historic wooden buildings there, their contemporary neighbors testify to a loving solidity, built to last more than a hundred years, down to the smallest detail. When I ask Willem De Bruyne, a knowledgeable local colleague, about the reasons for this harmonious building, he mentions the artistry of the local craftsmen first. They work closely with the architects and play a large part in the obvious quality. They are the ones who artfully bring knowledge of sustainability and materials-appropriate workmanship to the process.

And right, on the outskirts of the villages they are easy to spot with their large halls. The carpenters and joiners, the plumbers and plasterers, the electricians and bricklayers.

In this Silicon Valley of craftsmanship, they shape the communal self-image with their high professional standards and are a central component of the regional culture.

Construction in Germany is currently caught between these two poles. At a crossroad.

In the south, the skilled trades still enjoy a good reputation. Increasingly, they can find work in neighboring European countries such as Great Britain, Poland, the Netherlands and Norway, where structural deficiencies have led to the widespread loss of these skills.

The dual system of vocational training in Austria, Germany and Switzerland is considered a pioneer in Europe.

But this path, which was still glorified by Richard Wagner in his opera "Die Meistersinger von Nürnberg", does not fit in with the Anglo-American bachelor system and is today quite unjustly regarded as second-rate training. And so many of the jobs on offer remain unfilled.

More appreciation could be of help.

However, the construction industry relies on low-cost task-workers from Southeastern Europe. Training on the job. This makes the difference between the industry-educated engineers and the unskilled workers on the construction site even greater The language gap is often almost impossible to bridge.

In France, the Netherlands and even England, the knowledge of technically flawless detailed solutions is already almost non-existent across the board. Not among the companies carrying out the work, and not in the architects' offices either. This is because planning and construction there is predominantly left to general contractors. They get involved shortly after planning begins, then "optimize" according to their ideas and assign the work to more or less unskilled contractors.

In Germany, too, general contractors under the marketing terms "Design & Build," "Bauteam," or "Construction Partner" are trying to put an end to this misguided approach. They promise to relieve developers of the imponderables of construction. But appearances are deceptive. Hardly any general contractor takes even a scintilla of risk off the client's hands. Contractors optimize at the expense of construction quality, thus harming the subsequent owners. Without a knowledgeable architect on their side, many clients lack the knowledge to successfully introduce their own interests. Goals shift to the detriment of value and in favor of short-lived and expensive implementation. This fast food architecture is going in the wrong direction.

It is therefore all the more important to adjust the balance of power between planners, clients and executing companies in such a way that there is a knowledgeable and understanding cooperation at eye level. By this, I do not just mean polite and appreciative manners. It is about factual knowledge, craftsmanship, production conditions and technical know-how.

In Germany, too, many craft businesses are under pressure today. They are particularly often affected by insufficient financing options, a shortage of skilled workers and competition from abroad.

Their ability to innovate is significantly weaker than that of the industry. Which craft enterprise has a research and development department?

It is inexplicable to me that people simply stand by and watch the good craft enterprises disappear bit by bit, and with them a great deal of the knowledge and skills of good construction are lost.

How is the preservation of existing buildings and ecological reconstruction to be managed if hardly anyone can repair, restore, replace or install?

I recently attended the jury meeting for this year's Innovation Award. The proposals submitted were evaluated according to the criteria of degree of novelty, USP, protection against imitation, scalability, likelihood of success, and benefit to the environment and society. No craft company participated. But if I apply these criteria to the work of craft enterprises, the future opportunities for them lie in the combination of digital, three-dimensional planning (BIM plus) and high-quality prefabrication by hand. This works best in weather-protected halls, with excellently trained and well-paid craftsmen.

This could give hope for a renaissance of craftsmanship.